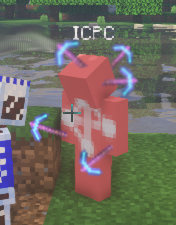 Steve enjoys parties and word games. At one party, he challenges his friends to play a new word game that he invented.

In Steve’s game, there are four words: “Efficiency”, “Unbreaking”, “Silk”, and “Touch”.

For instance, in a game of $3$ people, the sequence of words is as follows:

Here, one can see that it takes $24$ turns (number of words said) to complete three rounds of the game. Moreover, Player $3$ goes last during the third round.

The output should consist of two lines. On the first line, output the $M^{th}$ word said during the game; it should be one of “Efficiency”, “Unbreaking”, “Silk”, or “Touch”. On the second line, output an integer representing the player who goes last during this round (players are numbered $1, 2, 3, \ldots $).

Please log in to submit a solution to this problem